‘The United States of North America, with the British & Spanish territories according to the treaty of 1784’

William Faden created and published this map in London in 1785. Engraved and hand colored to reference the lands claimed by Great Britain, The United States, Spain, and France. It’s a beautifully detailed pictoral-relief map that shows several Native North American tribal lands and notes such as “Extensive Meadows full of Buffaloes” and “Country full of Mines”, plus an inset of the Bahamian Islands. 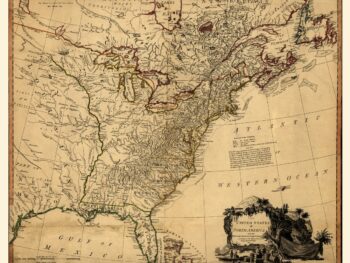